Hope Through Dance During A Pandemic

Second year MFA candidate and Graduate Teaching Assistant Jacqueline Cherry is a dancer, choreographer, and actor, plus a Buffalo, NY native. As part of Theatre and Dance’s fall 2020 virtual dance concert Home and Away she choreographed and starred in a solo piece titled “Be Alright,” filmed in downtown Buffalo outside of her church, which is currently closed due to the ongoing Covid-19 pandemic.

“Be Alright” was inspired by a skyward gesture Cherry discovered during a department dance-making course last semester. “It was about hope. I wanted to do something about things getting better because everybody’s going through a tough time,” Cherry explained. 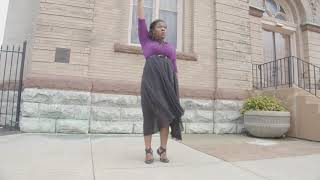 Much of the choreography for “Be Alright” was developed in an unconventional space. “For some reason I like to dance in my kitchen! And I’ll do something (she lifts her right elbow as if dancing) and think, ‘Oh, that’s interesting! And then there’ll be a whole thing just from that one little action. That’s part of the process sometimes.”

How does Cherry capture dance ideas at the kitchen sink? “I have a (digital) camera. I put some music on… and then I’ll describe things while I’m dancing and place the camera wherever I need, if it’s a foot motion or whatever,” to recall later how the movement was generated.

“If I try to remember it through the media I took the idea on, then I feel more comfortable to try to record it like that (for the final work). In the section where I am reaching up and the camera comes around, that was all from seeing it (in her home demo) and being like, ‘That’s the way I want my audience to see it,’” akin to a film director. Dance for film has grown during Covid-19. Whereas most dance companies of the 20th century focused on creating work primarily for live concert performance, younger dancers including Cherry have quickly adapted to online media, including short videos and industrial-quality films.

“I’m sure it has a lot to do with social media and having something on that platform,” Cherry said. “You’ve got a lot of TikTokers and YouTubers, and generationally there are a lot of things that are forcing it in that direction. People are understanding what other things dance can be used for. Even in Hamilton, the way that they use dance to move the set and scenery. It’s not (a) new (idea), but it was very well done.”

Cherry’s personal journey towards a MFA took an unexpected route. Prior to receiving a BA from Buffalo State College she stepped away from dance for ten years to explore other potential professions, and to start a family. However, “Every interview I went on, I was (still) talking about dance,” she said, and was eventually pulled back. “Watching the journey of my life from quitting dance to going to grad school for dance has been miraculous for me.”

For the time being, most of Cherry’s works are solo pieces, though she hopes to collaborate with other dancers in the future. “I’m still trying to understand my voice, (and work on) my mind-body connection. (To date) it has been easier to work with my own body first, but I see that coming in the future, working with other dancers.”

Cherry has embraced her academic experiences through the personal lens of her identity and heritage as a young Black woman. The approach—combining activism and art-making through academia—has been a kind of awakening. A new piece she hopes to create reflects this. “I want to show how limiting—I just realized—I haven’t been allowed to think beyond a certain point. As a Black woman you’re not supposed to live outside of this neighborhood; you’re not supposed to be in grad school. You’re not supposed to be in these places. And I do want to do a piece about being limited like that. I think that would be a really interesting way to show in movement what that is, that feeling.”

As a choreographer and graduate scholar her interests also include performance theory, sociology, and Black feminism, somatics for the Black body, and the trauma of the embodied Black experience.

“I definitely like narrative styles. I’ve been doing a lot of reading and research, and I’m very interested in Black feminist thought, and Black sociology, and subjects about how society treats Black people. If you look at history—a lot of Black artists and entertainers end up being activists because we have a platform that not many Black people get. So they really do go hand in hand in a lot of ways.”

Cherry’s “Tethered and Maligned” addresses the difficulties Black women can face in seeking quality affordable housing. Meant more as a dance for film, it hasn’t yet been publicly performed. 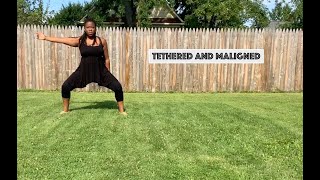 “There a lot of black women who deal with this very bad stereotype and end up in housing that isn’t ideal. So when I show that piece to Black women, unanimously the word ‘powerful’ is used. The dialogue / text was taken from an interview with someone who was talking about this very subject and I took chunks of what she was saying and put it over the music.”

Another area of Cherry’s research is kinesiology / anatomy, the science of human movement. “I’m very interested in body language… how you hunch over when you’re lying, or your body language when you’re excited about things, and all of those motions are very meaningful.”

“I have a piece I’d like to submit to a dance festival. I did a voiceover talking about my experience in Covid and being stuck at home. I have a really big couch and a little space in front. I recorded all of these random videos and then I put them together under this voiceover.” 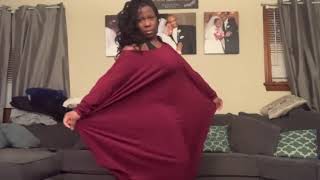 "Uncertain Stillness" is something that almost everyone will relate to now, especially anyone seeking a creative outlet. It's personal to Cherry’s situation and new motherhood, but universal given what we’re all experiencing during Covid-19. “The whole thing is about being in isolation, but then I used dance to lift my spirits and I felt better.”

Cherry feels that her time working with Buffalo’s Ujima Theatre Company as an actor was key to her artistic development, especially the mentorship of its founder and artistic director Lorna C. Hill, an acting powerhouse in Buffalo for many decades. Hill’s passing last year was deeply felt by the community. Ujima is the third principle of Kwanzaa and means “collective work and responsibility” and uplifting one’s community.

“She actually wrote a recommendation for me (to enter the MFA program). She was a lot of the inspiration for wanting to be an artist activist,” Cherry said. “She was very involved in doing things for the community and that was powerful to see someone do that, and the way that she did that. I miss her a lot, and some of the work that I want to do will hopefully be in her honor. There has been a strong sense of wanting to carry on what she started. There’s an overwhelming sense of need for Ujima.”

With three semesters to go, upon graduation Cherry hopes to work at a university. “That would be a great next step for me. I do appreciate that here (through UB Theatre and Dance) they encourage you to follow your path. I don’t know if other programs do that, but I really feel it here.”