On a hazy morning on July 26, researchers prepare scientific equipment in preparation for a series of blasts designed to simulate explosive events during volcanic eruptions. Photo: Meredith Forrest Kulwicki

Volcanologist Arianna Soldati watches one of the four blast tests that took place. Prior to the explosion, Soldati — a postdoctoral researcher at Ludwig Maximilian University and recent PhD graduate in geological sciences from the University of Missouri-Columbia — set up a 3-D, 360-degree camera to collect data closer to the blast site. Photo: Meredith Forrest Kulwicki

Debris flies during one of the workshop's four explosive tests. The blasts were generated by sticks of a high explosive called PETN. Photo: Meredith Forrest Kulwicki

Alison Graettinger (center, in white shirt) led post-blast activities like photography of craters and measurements of ejecta. Graettinger is an assistant professor of geosciences at the University of Missouri-Kansas City who previously conducted postdoctoral research at UB. Photo: Meredith Forrest Kulwicki

Debris from an explosion fills a cardboard box lined with plastic sheeting. Boxes were placed at various distances from the epicenter of blasts, with the goal of understanding how debris is distributed. Photo: Meredith Forrest Kulwicki

Julia Boyd, a student from the University of Missouri-Kansas City, was part of a team that studied debris thrown out by the explosion. The debris, called ejecta, was collected in shallow boxes placed at varying distances from the epicenter. Photo: Meredith Forrest Kulwicki

Share This Print
“This is the only place in the world where they are using chemical explosives to try and mimic processes from a volcanic eruption. ”
Arianna Soldati, postdoctoral researcher
Ludwig Maximilian University 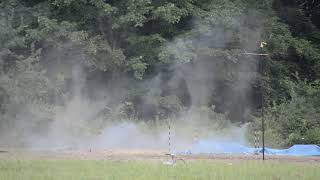 Check out this video of one of the test explosions conducted as part of the
Field-Scale Experimental Volcanology Workshop run by the UB Center for Geohazards Studies.

In a forest clearing at the end of a steep gravel road, UB geologist Andrew Harp poured sand into a hole loaded with dynamite-like explosive charges. It was a quiet day. Tall grasses rose in the distance. Wildflowers — purple, white and yellow — caught the breeze. A bird call sounded.

Then, a countdown: FIVE… FOUR… THREE… TWO… ONE.

Six explosions detonated in quick succession, throwing plumes of sand and crushed limestone into the air. Applause broke out. Then, about 50 people, mostly scientists interested in volcanoes, dispersed from their perch on a nearby slope to check on research equipment and scrutinize the crater left behind by the blasts.

Welcome to the Field-Scale Experimental Volcanology Workshop run by the UB Center for Geohazards Studies. Taking place from July 24-27, the event — supported by the National Science Foundation — drew participants from as far away as Italy and Japan.

“This is the only place in the world where they are using chemical explosives to try and mimic processes from a volcanic eruption,” said attendee Arianna Soldati, a postdoctoral researcher at Ludwig Maximilian University and recent PhD graduate in geological sciences from the University of Missouri-Columbia.

“It’s a controlled experiment,” said Greg Valentine, a UB geology professor and director of the Center for Geohazards Studies. “We know what the conditions are that create the explosion. We know the pressure, the gas content, the depth of the explosion, the strength of the explosion.”

So how does this relate to real-world volcanoes? If you know how the ground shakes or how debris flies in a controlled blast, you can use this data to gain insight into the forces that drive explosive eruptions in nature.

“No one university or scientific group has all of this”

At the field station, preparations for Thursday’s blasts began early on Wednesday. It was hot and stifling, a damp morning with silver clouds hanging in the sky.

In the clearing, Kyle Comstock, a UB undergraduate, armed himself with a shovel and pickaxe. He was there to help Greg Waite, a geophysicist at Michigan Technological University (Michigan Tech), dig a 1.6-meter-deep hole where seismometers would be buried at varying depths.

Elsewhere, other participants were busy erecting an amalgam of scientific instruments to document each blast.

Some tools were decidedly low-tech: Alison Graettinger, an assistant professor of geosciences at the University of Missouri-Kansas City, directed a team in lining shallow cardboard boxes with plastic sheeting. Later, these receptacles would be placed at varied distances from the epicenter of blasts. The goal? To catch and measure the distribution of debris, called “ejecta.”

“No one university or scientific group has all of this,” Soldati said. “We are going to know everything about these explosions.”

Soldati ran a 3-D, 360-degree camera. Colleagues from other institutions took videos from drones and high-speed cameras. Some did photogrammetry, creating 3-D models of the blast craters for future research.

This kind of open-ended research was exactly what organizers — including Valentine; Ingo Sonder, lead experimental scientist at the Center for Geohazards Studies; and Harp, a recent UB geology PhD graduate — had in mind. Instead of designing the workshop to answer one specific question, they planned the experiments to be useful to scientists working in many different fields.

At real volcanoes, explosions can happen under varied circumstances: when hot gases get trapped, for example, or when water and magma meet.

Understanding real-world blasts — and the risk that volcanoes pose — was a shared objective of workshop participants. One example: Médici, the Michigan Tech engineer, hopes to develop early warning systems for volcanic ash, which could help air traffic controllers.

Graettinger, a former UB postdoc who returned with her students for the workshop, led post-blast activities like on-the-ground photography of craters (to be used later in photogrammetry) and measurements of ejecta.

Tasks included hunting down brightly colored spheres that were buried before the blasts at known locations. The balls were homemade, crafted earlier in the week from plaster injected into ping pong balls that were later cut away.

“This work really focuses on how eruptions evolve and the evidence they leave behind,” Graettinger explained in an email a few weeks before the blasts. “Being able to better read those deposits and craters left by past eruptions will help with our understanding of what happened before and anticipate what can happen in the future. This will help numerical models and conceptual models of what happens during explosions and after.”

In her message, Graettinger discussed the UB Geohazards Field Station and the unique experiments the set-up there enables.

Melting rocks to make lava, and injecting that lava with water? Check. Detonating ping pong balls to model eruptions? Thursday’s tests were a continuation of this brand of work, giving volcanologists the rare opportunity to conduct controlled experiments at a scale larger than what can occur in the lab.

“The workshop and the field station provide a unique opportunity to ask new and better questions about how we understand volcanic processes,” Graettinger wrote in her email. “We can tell our analog volcanoes when to erupt, and calibrate our techniques and instruments before taking them out to dangerous and messy real volcanoes.”